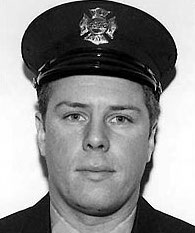 This Firefighter Hero WOD is dedicated to Edward Rall, FDNY, Rescue 2, who was killed on September 11, 2001.

Edward J. Rall, 44, of Holbrook, was a New York City firefighter with Rescue Company 2 in Crown Heights, Brooklyn. He was among seven firefighters from Rescue 2 who perished on Sept. 11, 2001. The men were believed to be in the north tower. His remains were never found.

When the first hijacked plane crashed into the north tower on Sept. 11, 2001, Darlene Rall knew that Eddie would be at the World Trade Center, but she wasn’t concerned that death would touch her husband. Minutes later, another plane struck the south tower and she was still at work going about her business.

“I have to say I wasn’t nervous. It was a big chance for a rescue for him, doing what he wanted as a fireman,” said Darlene, 52, of Holbrook. “As strange as it might be I was excited for him.” It wasn’t until Darlene heard that a third and fourth plane had crashed into the Pentagon and into a Pennsylvania field that she became concerned. “The minute I walked in the door, I saw the first tower come down. I knew more than likely he wasn’t coming home,” she said.

With the couple’s three children – Joseph, 26, Matthew, 23, and Daniel, 22 – now grown and starting their own lives, Darlene was ready to move on with her life. Two years ago she became reacquainted with an old family friend in Newfoundland, Canada, her birthplace. But a long distance relationship has its own challenges.

“I’ve moved on. I enjoy myself, but I still miss him terribly,” she said. Aside from his family, there were two other loves in Eddie’s life. “When he wasn’t talking about baseball, he was talking about the fire department,” his wife said.

Eddie coached baseball when his son, Daniel, was a kid. The Sachem Youth Advisory Group, part of the school district league, held a memorial baseball tournament in Eddie’s honor. In the first year, about 30 teams from the tri-state area participated in the weekend-long tournament, Darlene said. Now, there are 159 teams. The money goes to help the league pay for the upkeep and maintenance of the baseball fields and to fund the Edward Rall Memorial Scholarship.

Moving on hasn’t been easy, Darlene said, because references to the terrorist attacks are everywhere. Darlene picked up a novel and the first several pages talked about Sept. 11 attacks.

“That’s what makes it a little more difficult to put it behind you because you can’t,” she said. “At the same time, the response from people everywhere is absolutely amazing. It’s a double-edged sword all around.”