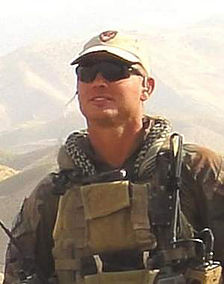 Dedicated to Gunnery Sgt. Jonathan Gifford, who was killed in action July 29, 2012 during combat operations in Afghanistan and was posthumously awarded the Navy Cross – the second-highest military decoration for valor – for his actions.

Gifford was nominated by his fellow Marine and cousin Brian Lelievre for this Hero WOD, created by marinewod.com.

“Giff, as he was called, will forever be remembered as one of the most prestigious examples of a Marine in our history as a Corps. Not only was he a legend amongst his fellow Marines but also a leader of men and more importantly a loyal father, and husband.” Brian described Giff by simply saying, “he was really just a good human being, loved and cared deeply for his family, and the ones he served with.” He went on to describe the day that he saw Giff graduate boot camp at MCRD Parris Island and how from that point on all he wanted to be was a Marine. He later followed in his cousin’s footsteps and joined the Corps. Brian noted, “What stuck with me the most was how devoted a father and husband he was.”

In a video of U.S. Marine Corps General John M. Paxton Jr., Assistant Commandant of the Marine Corps presenting the award to Gunnery Sgt. Gifford’s family, he does an amazing job of sharing his story and legacy.

This “Giff” Hero WOD was originally posted on marinewod.com on July 29, 2014, the second anniversary of his passing.