With a running clock, as fast as possible perform the prescribed work in the order written. Athlete must accomplish 21 Bench Presses, 21 Ring Dips, and 21 Hand Release Push-Ups before moving on to 15 repetitions of each movement, etc.

Score is the time on the clock when the last round of Hand Release Push-Ups is completed. 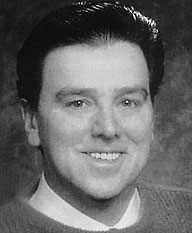 This Firefighter Hero WOD is dedicated to William Wren, FDNY, retired, who was killed on September 11, 2001.

There are moments when the only sound in the living room is the ticking of the big wood clock on the wall. Its hands count down the wait for the family inside the brick house.

Pat Wren sits on the couch, surrounded by her children, who stretch out on the soft blue carpet. Everyone jumps at a knock on the screen door.

The caller is a neighbor, Colleen Fitzsimons, who has come to join the vigil. The Wrens and the Fitzsimonses are awaiting news of Pat Wren’s husband, William, and Colleen Fitzsimons’ father, Richard. Both men worked together as fire security officers at the World Trade Center. Both have been missing since the towers collapsed Tuesday.

“We walk around the house passing each other like ships in the night,” Pat Wren says. “No one is talking.” Colleen Fitzsimons nods. “Same with us,” she says. “It’s like being in a daze.” The Wrens and the Fitzsimonses live a few houses apart on a street where children play in each other’s yards. The vigil has unsettled this quiet, shady block along Vincent Avenue in Lynbrook.

William Wren, 61, and Richard Fitzsimons, 57, have been neighbors for nearly three decades. Both are retired New York City firefighters, and both work for OCS Security, providing fire safety at the Twin Towers. The Port Authority contracted with the company as part of stepped-up safety precautions that were put into place after terrorists bombed the World Trade Center in 1993.

When terror struck again Tuesday, Wren, operations manager at the towers, and Fitzsimons, a safety officer, helped evacuate the buildings to bring tenants to safety.

Shortly after 9 a.m. Wren called his wife to tell her he was fine. Sirens wailed in the background. Ten minutes later, he called again. “Richie’s OK, too,” he said. “Call his wife and tell her.” So Pat called Patricia Fitzsimons. “We’re home free,” Pat remembers thinking. “Then nothing.”

That’s the last the families have heard of the men who shared tools and books. Whose children played along the tree-lined sidewalks together as youngsters and took part in each other’s weddings as adults. Now the families are left to worry together. To listen to deep sighs and ticking clocks. To share questions.

They wonder if the rescuers know that the men might have fled to the subbasement of one of the buildings. It’s more secure there, isn’t it? they ask each other.

Cell phones line the coffee table in the Wrens’ living room, just in case an important call comes in. A family photo hangs over the fireplace. The families talk about the missing men.

William Wren spent his childhood in Gerritsen Beach in Brooklyn, graduating from James Madison High School. He served in the U.S. Army for three years before joining the fire department. He is a private, reserved man, the kind of person who doesn’t talk about his fire-fighting adventures.

Richard Fitzsimons was raised in the Bronx and Astoria. He served in the Army in Vietnam, then spent years working in internal auditing for NYNEX. He’s the kind of man who likes to try everything, his daughter says, from coaching ice hockey to taking piano lessons.

“He had a lot of different interests,” says 32-year-old Colleen Fitzsimons. “He is definitely outgoing.” The families want people to know that the fire security officers are heroes, just like the firefighters and rescue workers who are missing.

They want everyone to know that the two men, along with others who are missing in their crew – Philip Hayes, 67, of East Northport and Larry Boisseau and Robert Mayo, both of New Jersey – knew the building inside and out. They evacuated the day care first.

The hope that is almost palpable on Vincent Avenue touches Seventh Avenue in East Northport. Hayes, a retired New York City firefighter, was trying to evacuate everyone from the building when someone handed him a phone and told him to call home. He told his wife, Virginia, over a static-filled line, that things were crazy, but he was fine.

“He said he was going to call back,” says son-in-law Brian O’Gara. “We’re waiting.” The Wrens and the Fitzsimonses are doing the same. “I don’t even want to think of the days ahead,” Chris Wren says. He sighs. The clock ticks in the background.