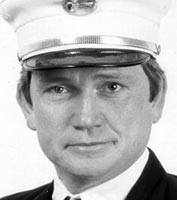 This Firefighter Hero WOD is dedicated to William O'Keefe, FDNY, Battalion 15, who was killed on September 11, 2001.

The little things mattered most to William S. O'Keefe. Running at sunup along the beach at Sea Isle City on the Jersey Shore with his daughters, Tara and Kaitlin. Working out a folk or rock tune on his acoustic guitar. Doting on his two beagles, Lucy and Desi.

Promoted to captain in the city Fire Department in May, the 48-year-old Eltingville resident lost his life responding to the World Trade Center terrorist attack on Sept. 11. "He was a wonderful person, a completely devoted father and husband," said his sister-in-law, Barbara Weimar. "And a very brave firefighter."

A lifelong Staten Islander, Mr. O'Keefe was appointed to the Fire Department in April 1979. He worked his way through the ranks, spending 15 years at Engine Co. 224 in Brooklyn and seven years at Engine Co. 154 in Travis. Following his promotion to captain, he was assigned to Division 15 in Brooklyn. "He was very proud of the promotion," said Ms. Weimar. "His family was very proud."

Dedicated to his wife, the former Ginny Sheehan, and his daughters, Mr. O'Keefe relished the family's annual summer treks to the Jersey Shore. They recently returned in July from Sea Isle City, where he would rise at dawn to run along the boardwalk. Mr. O'Keefe also enjoyed watching his girls' track meets. Tara, 19, and Kaitlin, 16, have both run for St. Joseph by-the-Sea High School.

Mr. O'Keefe was an avid runner himself, participating in a number of long-distance events and firefighters' races. He enjoyed golfing, and loved playing the guitar. Handy with a hammer and saw, Mr. O'Keefe also liked renovating his home.

His family said he had a terrific sense of humor, joking and keeping the mood light. "He was a very funny and amusing guy," Ms. Weimar said. "We all loved him." Mr. O'Keefe was born in Tottenville and moved to Great Kills with his family as a 5-year-old. He settled in Eltingville in 1982 following his marriage. A graduate of Tottenville High School, Mr. O'Keefe earned his bachelor's degree from the former Richmond College in St. George. He was a parishioner of St. Clare's R.C. Church, Great Kills.
Source: www.555fitness.org
No Ads (Upgrade)