Perform 3 burpees every minute on the minute, including at the start of the workout, until 100 squat cleans are completed. 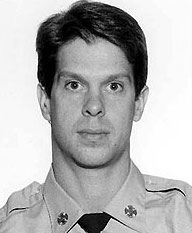 This Firefighter Hero WOD is dedicated to Stephen Russell, FDNY, Engine 55, who was killed on September 11, 2001.

If Steve was not on the bay, he was in it or under it. Stephen P. Russell was a firefighter with Engine Co. 55 in Little Italy. Steve and his fellow firefighters were investigating a gas leak nearby on September 11, 2001. They rushed to the towers and joined other FDNY units in evacuating those moving down from the upper floors.

They called him “MacGyver” at the firehouse. He could fix anything and do anything that needed to be done. He worked wonders with wood. He was a member of the Carpenters Union. He was so skilled that he built his own furniture and many items for the firehouse as well. He had even built a display case which has now become a memorial to him and his four fellow firefighters who died at the World Trade Center.

Steve was born and raised in Arverne (Rockaway Beach), New York, and lived in his house on Jamaica Bay. Steve loved the water. He was a master scuba diver, a sailor, and an avid water-skier.

Steve was very close to his family. He lived with his parents, Marie and Clifford. His older brother, Clifford, spent many days searching for his brother in the smokey rubble. To his sister-in-law, Christina, he was more than a brother. To his nephew, Evan, he was a protector. To his nephew, Cliff, he was a dive buddy and best friend. To his nephew, Christopher, he was godfather and mentor. To his niece, he was the best uncle a girl could ask for. He often called her his own. Steve was the youngest of three sons. His brother, William, resides in New Hampshire with his wife Adrienne.