The Burpee The Snatch 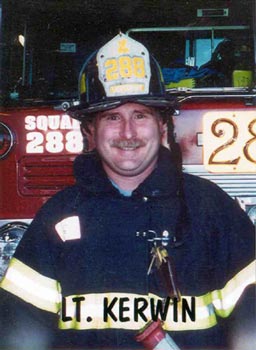 This Firefighter WOD is dedicated to Ronald Kerwin, FDNY, Squad 288, who was killed on September 11, 2001.

Ronny Kerwin was the fun parent, according to his wife, Dianne. "He was the spontaneous one," she said. It was not unusual for him to suggest a drive to Robert Moses State Park to see the deer, to take the family bowling on the spur of the moment or to plan a trip to Disney World.

His wife doesn't know how those moments will happen now that Kerwin is gone, and she thinks her three children wonder who will plan those family outings. "I guess that's the way I'll grow," she said.

A lieutenant in Fire Squad 288 in Maspeth, Kerwin, 42, of Levittown, is missing in the terrorist attacks. Kerwin, who was a member of the New York City Fire Department for 20 years, had been chief of the Levittown Volunteer Fire Department for the past eight years and a member for 16 years.

Married for 16 years, the Kerwins have three children, Ryan, 12, Keith, 9, and Colleen, 6. His wife said she was blessed with a happy and healthy marriage, and she couldn't have asked for a better husband or more harmony. "We made every decision together, even the most simple decision," she said. "That's why it's so hard now."

Kerwin had Hofstra University basketball season tickets and would often take his wife and children to see the games. When he was off from work, he would spend time fixing their home or be at sports fields rooting his kids on. "We had a lot of quality time together," she said.

Throughout their marriage, his wife said, Kerwin never brought the very real risks of his job as a firefighter home with him. "I knew there were dangers, but he sheltered me from that," she said. "You don't want to spend your life thinking, 'Is he coming home?'"
Source: www.555fitness.org
No Ads (Upgrade)