The Back Squat The Run (Running) 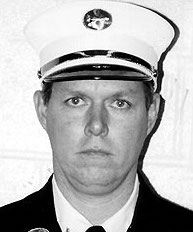 This Firefighter Hero WOD is dedicated to Robert Regan, FDNY, Ladder 118, who was killed on September 11, 2001.

Robert M. Regan, 48, of Floral Park, was a lieutenant in New York City fire department’s Ladder 118. He was last seen in the lobby of the Marriott Hotel evacuating people. His remains were recovered New Year’s Day, 2002.

Almost 10 years later, their daughter is a graphic designer living in Manhattan and their son just graduated from Marist College and is an intern at NBC. “Now their shoulders are strong, their chins are up, and they are thriving,” Regan said. She attributes their success to her husband’s enduring impact. “From strong roots grow tall trees. It’s all him.”

Robert Regan, a civil engineer for 10 years, had been unhappy with the time away from home that the job demanded. In 1985, he joined the fire department, where he enjoyed the camaraderie and the ability to spend more time with the children. “He loved the fact that the fire department allowed him to be Mr. Mom,” his wife said.

He coached their son’s Little League team and coordinated a summer baseball league. Brendan Regan’s dream had been to go to his father’s high school, Archbishop Molloy High School in Briarwood, Queens, and play baseball – which he did.

And Donna Regan attributes their daughter’s design skill to time with her father. “They planned and designed the absolute best projects together – hence her precise eye for detail now as a graphic designer – all gifts from him,” she said.

The family has established a Robert M. Regan Scholarship at Archbishop Molloy. And a baseball/softball field in Floral Park has been named after him. But his greatest legacy is their children. “Facing this 10th anniversary, to be able to say we’re OK, we’ve taken him with us – that’s nothing short of a legacy,” she said. When people see their children, “they are going to see him.”

Bridie Regan, 70, of Bayside came home one day to find a new front door on her home. She hadn’t asked for one, but she was pretty sure she knew who installed it. “Bobby could do anything with his hands,” she said of her son Lt. Robert Regan, of Ladder 118, Engine 205, in Brooklyn Heights. “He used to take apart and rebuild washing machines for neighbors. Anytime we needed someone handy, we’d call Bobby.”

The month after Regan put in the door, he returned with a gold nameplate that he insisted his mother put on the door. “I don’t know how he got so good with his hands,” said Regan’s brother Kevin of Floral Park. “We grew up in the same house, and I can’t even screw in a nail. You can’t screw in a nail, can you?”

Robert Regan grew up in Briarwood, Queens, and graduated from Archbishop Molloy High School there in 1971. He received his bachelor’s degree in civil engineering from Manhattan College in 1975. For 10 years he would help to build bridges and buildings. His career would keep him away from home for extended periods, something he found especially difficult after the birth of his first daughter, Caitlin, in 1985, said his wife, Donna.

“He couldn’t stand to be away from his family,” she said. Torn between his career and his family, Regan made a decision: He became a firefighter. Regan joined the New York Fire Department in 1985. “When my husband joined the fire department, they told him that he’d never be rich, but he would be happy,” his wife said. “And he was. People always said Bobby was never without a smile. And what a smile.”

Regan would spend much of his free time with his children – coaching his son Brendan’s Little League team or planning a surprise birthday party for his daughter. Regan was last heard from Sept. 10, sometime after 9 p.m., his wife said. “He called to say goodnight to his kids and to me,” she said. He worked the overnight shift and is believed to be among the firefighters lost at the World Trade Center on Sept. 11.

In addition to his wife, children, mother, and brother, Regan is survived by another brother, Peter, of Flushing.