With a running clock, as fast as possible perform the prescribed work in the order written. For the walking lunges, one repetition is equivalent to one right and left lunges. 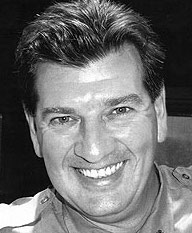 This Firefighter Hero WOD is dedicated to Raymond York, FDNY, Engine 285, who was killed on September 11, 2001.

Raymond R. York, 45, of Valley Stream, a veteran firefighter with Engine Co. 285 in Queens, had been assigned to light duty due to an on-the-job injury. On 9/11, he was playing the role of “Fireman Ray” in a fire safety show at Rockefeller Center. He made his way to the burning towers by hitching a ride with a television truck and an ambulance. His remains were found the next day on West Street. Robert York was in the seventh grade when his father was killed. The 11-year-old, the third of four children and the oldest boy, felt he needed to shield his mother and siblings from further harm.

“I wanted to protect everyone,” said Robert York, now 20. “I was afraid something would happen if I wasn’t there.” The death of his father, he said, forced him to grow up much faster than his peers.

“I wasn’t interested in all the parties. Going out Friday nights wasn’t for me,” he said. “Not that I shuttered myself from the world but I felt I had to be home in case something happened. I just felt my family needed me more than my friends did.”

Following his father’s career path, York, a volunteer firefighter at the Valley Stream Fire Department, plans to take the FDNY exam in January.

Raymond York, who had worked with the FDNY for 20 years, had planned to retire at the end of 2001, said his wife, Joan York, 49. On Sept. 10, he visited the FDNY’s pension unit to get his affairs in order.

“He loved his family, his country, the FDNY, and of course, the Yankees,” his wife said. “When he loved something, he loved it 150 percent.”

Like the time his youngest son, Michael, wanted to play ice hockey but didn’t know how to ice skate.

“I told Ray to get Mike skating lessons. He decided he was going to build an ice-skating rink in the backyard,” his wife said. “He got these tarp things and formed it out with wood and he was going to fill it with water and freeze it. That was just a typical Ray story. He never did anything small. It was an eyesore in the yard. It made him happy and Michael was thrilled.”

Raymond York could not be kept from the World Trade Center after two hijacked airplanes smashed into it Tuesday.

York, a 20-year city firefighter from Valley Stream, died beneath the rubble of the falling Twin Towers. He wasn’t supposed to be there, said Bill Abruzziano, York’s friend, fellow firefighter and brother-in-law.

York, 45, had been injured on the job about a year ago and had been assigned to light duty. He was playing the role of “Fireman Ray” in the Fire Zone, a theatrical fire safety show at Rockefeller Center.

On Tuesday, he was about to do a public relations event for a television station when he heard about the first plane hitting one of the towers, Abruzziano said. He ran to the nearest fire house, Ladder Co. 2 and Engine Co. 8 on 51st Street. When the second plane hit, York ran back to Rockefeller Center, got his firefighting gear and hitched a ride with the television station’s satellite truck.
“He was so pumped up,” Abruzziano said. “This was like a call to arms for him. He would have to be there.”

The television truck got snarled in traffic at Canal Street, so York flagged a ride with a passing ambulance. He wasn’t seen again until his body was pulled from beneath the rubble the next morning. That same full-tilt enthusiasm colored everything York did, said Abruzziano.

“He loved his family, his country and his job,” Abruzziano said. When his first marriage ended and he found himself a single father, Abruzziano said York requested a transfer to a Queens fire house so he could be closer to his daughter, Kristina. Abruzziano said he introduced York to his sister Joan, who became his wife, with only a little trepidation.

“Just because you hang out with someone doesn’t mean he’s going to be good to your sister,” Abruzziano said. “But he treated my sister like a queen. You’d see them together and you knew they were in love.”

When they got their house in Valley Stream, it was run down. But instead of making it look pretty, Abruzziano said, York first built a laundry chute after he noticed his wife carrying the laundry to the basement.

He had three children with Joan York, Kristen, Robbie and Michael.”He was like a big kid himself. “That’s why he was a success in the Fire Zone as ‘Fireman Ray,'” Abruzziano said.

“It was for kids, so he was at his best,” he said. As a firefighter himself, Abruzziano said it’s been difficult to read the long list of missing and killed firefighters. “It’s so huge, this thing,” he said. “I know 60 guys on that list. But Ray, he was a good one.”