With a running clock, perform the work as written as fast as possible. One partner works while the other rests (you-go-I-go style). Partition the work between partners as needed.

Score is the time on the clock when the last Wall Ball Shot is completed.

Overhead-Touch Push-Up requires the athlete to perform a hand-release push-up (aka: Press-Up), in which the chest is on the ground and hands are released from the floor, and athlete touches both hands together behind the head. With hands back on the floor, push up with arms fully extended and core tight to complete one rep. 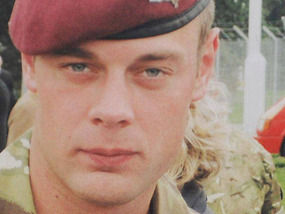 Background: This hero WOD is dedicated to Scott James Meenagh of Scotland, who was killed on January 25, 2011, whilst serving with the 2nd battalion, the parachute regiment on operations in Helmand Province, Afghanistan. He was fatally wounded when he stepped on an improvised explosive device while extracting Box no. 1 member Scott Meenagh on a stretcher. “He had already risked his own life to get to Scott and to help him deal with his own catastrophic injuries, and in doing so surely saved his life.”

For his actions that day, Martin received the George Medal for bravery but paid the ultimate sacrifice. Scott has been able to come home and love his life thanks to Private Bell’s bravery.

We first found this workout via a Facebook post by Clair Moffatt (re-posted by CrossFit Airdrie (Airdrie, UK)) in January, 2018. The WOD was designed by a member of CrossFit Airdrie @crossfit_airdrie.

The CrossFit Main Site posted the workout as “Martin” when it was the workout of the day for January 24, 2021 (210124). The only differences between the CrossFit Airdrie version and the CrossFit Main Site version is the Push-Ups (originally written as “Overhead-Touch” Push-Ups, but changed by CrossFit to the more common Hand Release Push-Ups) and the Thruster weights originally written in kilograms (43/30 kg) vs. pounds (95/65 lb).