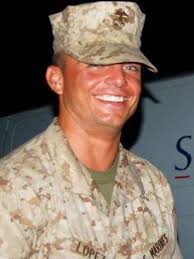 Background: This hero workout is dedicated to LCpl Joseph Lopez-Pratti who was killed on October 14, 2010 from an improvised explosive device while conducting combat operations in Helmand province, Afghanistan.

Joseph Lopez Pratti was deployed as a United States Marine to Afghanistan in October of 2010, in the Sangin Province. He was a part of the 3rd Battalion, 5th Marine regiment assigned from Camp Pendleton, CA.

While LCpl Lopez-Pratti’s unit was getting pinned down with enemy fire, LCpl Pratti was hit with an IED. During that deployment, 25 3/5 Darkhorse Marines were killed in action.

An excerpt from Los Angeles Times, “Cpl. Sean Johnson, 23, of Arkansas was Lopez’s squad leader. He recalled him as a few years older and more mature than the typical young Marine. Lopez would spend time reading up on material related to his duties, Johnson said.

In Afghanistan, Johnson made Lopez his saw gunner, which meant he operated an M249, a relatively high-maintenance machine gun. Once in the combat area, Johnson also frequently chose Lopez to be the “tail end Charlie guy,” watching to make sure enemies weren’t sneaking up. It was another high-responsibility position.

“Every time we got fired on, never once did he question doing anything or act scared or flinch,” Johnson said. “He always kept his head and moved calmly.””

The rep scheme signifies:
– 2,010 meter Row for the year when he died
– 25 reps for every marine fallen during the insurgent
– 4 rounds for the 4 brothers left behind.