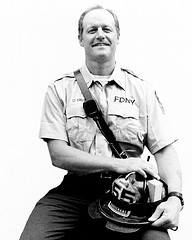 This Firefighter Hero WOD is dedicated to Peter Freund, FDNY, Engine 55, who was killed on September 11, 2001.

Peter Louis Freund, 45, a fire lieutenant who died in the Sept. 11 attack on the World Trade Center, first met the former Robin A. Miller when he was a student playing football for Tottenville High School.

Mr. Freund was a city firefighter for 22 years. He spent the last seven years as a lieutenant in Engine Co. 55 in Manhattan’s Little Italy. Prior to that, he worked for 12 years in Engine Co. 18, Manhattan, after a brief stint in Ladder Co. 8, also Manhattan.

On the morning of Tuesday, Sept. 11, Mrs. Freund was driving a bus for her local public school district — she had just started the job four days before. Mr. Freund had been at his firehouse since Monday morning.

“I tried to reach him in the morning. I used a cell phone in the bus garage and got a busy signal,” Mrs. Freund said. “When I got to the middle school I found out what happened — I knew he was there.”

Mrs. Freund said other firefighters told her they last saw her husband in a stairwell in Tower 1.