The Burpee The Deadlift The Row/Rowing 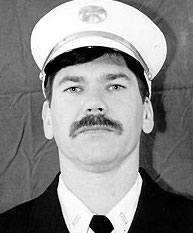 This Firefighter Hero WOD is dedicated to Michael Russo, FDNY, Special Operations, who was killed on September 11, 2001.

Michael Russo was a funny, free-spirited fireman -- a "nut," according to his brother, Anthony. But when Mr. Russo and his wife, Theresa, had their first child, Michael Jr., 15 months ago, the free spirit became the quintessential Mr. Mom. "He re-arranged all his shifts once they had the baby," recalled Arlene Regan of New Providence, his sister-in-law. "He did much of the child care."

"He made me look miserable when it came to housework," said Anthony Russo. "And he took his son everywhere he went. He just didn't stay at home and play with the baby. He took him to the firehouse, everywhere. He wanted to show him off."

Michael Russo, 44, died heroically on Sept. 11. The firefighter rushed into the World Trade Center to help those trapped inside. "I am really proud of him," said Allison Russo, his 14-year-old niece. "If I saw him tomorrow, I'd tell him how proud I was of him. I'd tell him, 'I hope my whole life you'll be looking down on me and that you'll be proud of me.'"

"Mike was everybody's," Theresa Russo said. "I feel like I only borrowed him for a short time. Those five years were like heaven on Earth."

A graduate of Manhattan College, Mr. Russo was a natural athlete. A pole vaulter in high school and college, he loved to scuba-dive, ski and play golf and ice hockey. He left school to become a firefighter and was assigned to Squad 1 in Park Slope, Brooklyn. Recently promoted to lieutenant, he had returned to specialized rescue work. He was working with Rescue 5 on Staten Island on Sept. 11.

"When he was off during the week, he visited cousins and aunts," Anthony Russo said. "He was always helping people keep together."

"My kids were almost his kids to him," Arlene Regan, Anthony Russo's wife, said. "He always made them laugh. He took them to shows. He was -- not goofy -- just a very fun-loving guy."
Source: www.555fitness.org
No Ads (Upgrade)