With a running clock, as fast as possible perform the prescribed work in the order written. Athlete must accomplish 21 Back Squats and 21 Double-Unders before moving on to 15 reps of each movement and so on.

Score is the time on the clock when the last round of double-unders is completed.

The Back Squat The Double-Under 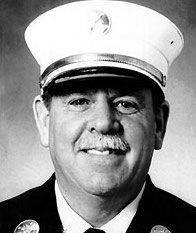 This Firefighter Hero WOD is dedicated to Matthew Ryan, FDNY, Battalion 1, who was killed on September 11, 2001.

Matthew “Matty” Ryan never stopped watching the backs of his firehouse mates – even as he climbed through the ranks, first as a captain with Engine Co. 280 in the Bedford Stuyvesant-Crown Heights sections of Brooklyn and then as a battalion chief.

He was eulogized at his funeral in November as a humble, granite pillar of support. By all accounts, his wife, Margaret, said, those who worked with him felt a sense of security when Ryan was on duty. Often as the battle against a major fire was being waged, it was said, Ryan could be found whispering instructions and calming words of assurance in the ears of less seasoned firefighters, she said.

It was no different on Sept. 11, when terrorists smashed two aircraft into the Twin Towers. Ryan, 53, died along with his firehouse mates that day, just two days after he returned to his Seaford home from a Cape Cod vacation.

Margaret Ryan said the love of her husband’s life, however, was his family. Even after 32 years of marriage and three grown children – Joyce, 26, Matthew, 24, and Meagan, 19 – Ryan said her husband “was a loving, dependable husband and father.”

And he was a man of simple pleasures, his wife said. He loved hockey, a game he started playing while attending a seminary in northeast Pennsylvania. He loved listening to music on the radio, and his taste in tunes ran the gamut, from jazz to reggae to Irish music.

And, his wife said, he rarely lived a day without reading the newspaper. Ryan was so into newspapers, his wife said, he even read the local papers when he vacationed. And when he returned home after being away, he would read every single paper he missed while he was gone.

Utopia for her husband, Margaret Ryan said, was taking in all three of his loves at once. And Sunday nights were his favorite time to indulge. At around 8 p.m., he could be found kicking back in his recliner with a hockey game on television, the radio dial on WFUV – an FM station that broadcasts from Fordham University – and the newspaper on his lap. He could often be found sound asleep, she said, around the predawn hours, the television and radio going full tilt and the newspapers piled up by his recliner.