With a running clock, as fast as possible perform the prescribed work in the order written for 6 rounds.

Score is the time on the clock when the final 400 meter Run is completed.

There are enough movements (and low enough volume per set) in “Loredo” to avoid any major muscle fatigue. Pick a strong pace from the beginning, and go faster as the rounds progress. Round 6 should be a sprint.

This is a workout designed to challenge your bodyweight strength and your cardiovascular endurance. The athlete should be moving fast and breathing heavily for the majority of the WOD. This workout should feel a little too long, like it should have only been 4 rounds—not 6.

Scale the volume (either the total number of rounds or reps) as needed to move smoothly and quickly. A strong pace—and minimal rest breaks—is important to get the benefits of “Loredo.”

The Air Squat The Lunge The Push-Up The Run (Running) 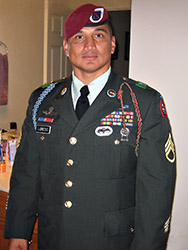 He is survived by his wife, First Sergeant Jennifer Loredo; his daughter, Laura Isabelle; his stepdaughter, Alexis; and his son, Eduardo Enrique.

The “Loredo” Hero WOD was designed by Michelle Benedict of CrossFit Fort Bragg and became an official CrossFit Hero WOD when it was posted on the CrossFit Main Site as the workout of the day for Monday, December 31, 2012 (121231).