The Back Squat The Push-Up The Sit-Up 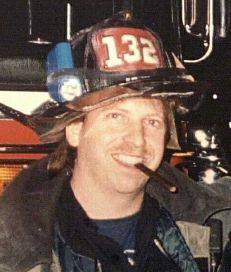 This Firefighter Hero WOD is dedicated to John Vigiano II, FDNY, Ladder 132, who was killed on September 11, 2001.

John Thomas Vigiano II, 36, of West Islip, was a firefighter with Ladder Company 132 in Brooklyn. He was last seen in the Marriott Hotel lobby, which was used by the fire department as a staging area. He was waiting to go into the south tower, said his father, a retired New York City fire captain. John's remains were never found.

Joseph Vigiano, 34, of Medford, was a New York City police detective with emergency services unit in Harlem. Joseph called his father and told him that a plane had crashed into the World Trade Center and he was heading to the site. His father told him to be careful and that he loved him. "I love you Dad" were Joseph's last words to his father. Joseph was last seen between the 30th and 35th floor of the north tower.

John and Joseph were devoted to their wives and their children. John had two girls and Joseph had three boys. Both men loved their jobs. The brothers also shared one other trait: kindness.

One year, John got some firefighters from New York and New Jersey together for a hockey tournament to help out a stranger. The money raised went to help defer hospital costs for a young woman who was severely burned during an arson fire at a dormitory at Seton Hall University in South Orange, N.J., said his father, John Vigiano Sr.

When a friend and colleague became ill and needed time away from work in order to receive treatment, Joseph stepped in and worked the officer's shifts for him, said John Sr.

Before the Sept. 11 terrorist attacks, John Sr. was a typical retiree looking forward to his grandchildren's birthday celebrations, attending their school plays and enjoying the occasional game of golf. Since then, he and his wife, Jeanette, have been guests at the White House and in the company of President George W. Bush and the Joint Chiefs of Staff.

"This isn't me. I am a fireman. Now, all of a sudden I am doing things you could read about," said John Sr. "I feel when I'm called to do anything, I have to put up a good front and honor my two sons."

Several times a year, he makes his way to the Walter Reed hospital in Washington D.C., sometimes accompanied by his two grandsons, to visit wounded soldiers returning from Iraq and Afghanistan.

"We have a common bond. If Sept. 11 had not happen, they may not be in these beds. Because they are, I am here to say thank you."
Source: www.555fitness.org
No Ads (Upgrade)