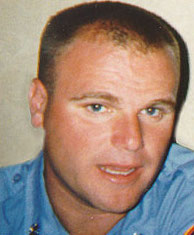 Because his son was a true hero of 9/11 he has no tolerance for fake heroes. “Every day that I wake up, my son Firefighter Jimmy Riches of Engine 4 is still gone,” says retired FDNY Deputy Chief Jim Riches of Dyker Heights. “Still dead in the terrorist attacks of 9/11. There is never closure. So on the 10th anniversary ceremony at Ground Zero the only difference will be that I will have to look at the faces of Rudy Giuliani and George W. Bush in person. I have too much respect for the dead to confront these two lying politicians at that ceremony.”

But Riches shared his thoughts with me recently, a father’s need to set the record straight with 10 years of perspective. “I don’t know how they invite Bush and Giuliani down to WTC on the 10th anniversary,” says Riches, president of the Parents and Families of 9/11 Firefighters. “They should be indicted for lying about the quality of the air in 2001. In 2005, I lay in a respiratory coma for 16 days resulting from exposure to that same toxic air during the recovery efforts.” He survived. To set the record straight.

From Sept. 11, 2001, to May 2002, Riches worked as a Battalion Chief in the recovery effort at Ground Zero, issued a paper painter’s mask while helping to locate some 25,000 human body parts, believing his President and his mayor in a time of war that the air was safe.

“We didn’t get proper respirator masks until December 2001,” says Riches, whose three other sons have since become firefighters. “More rescue workers will probably die from that poisoned air than did in the attacks. And now there’s no room at the memorial ceremony for them. But there’s room for lying politicians like Bush and Giuliani to come for a photo op at this sacred site, basking in glory, while they should be hanging their heads in shame.”
Riches will never forget that a year before Giuliani took office firefighters used inferior radios that failed during the first WTC bombing.

“Eight years later, on Sept. 11, 2001, firefighters like my son Jimmy were still using the same inferior radios,” Riches says. “Cops testified at the 9/11 Commission hearings about racing down the north tower stairs, passing firemen coming up. The cops warned the firemen that they got the call to flee the building. The firemen said they didn’t get that order.” So they kept climbing. To their deaths.

“The north tower fell 28 minutes after the south tower, and we still lost 121 firefighters in the north tower,” says Riches, whose son Jimmy was discovered on March 25, 2002, in the rubble of the north tower beside a woman on a stretcher he was probably helping.

“They should have gotten out. Maybe not all. But some. But they didn’t because the radios under eight years of Giuliani’s watch were the same ones that failed in 1993. And then Giuliani writes a book called ‘Leadership’? And goes on a national speaking tour as ‘America’s Mayor,’ earning himself $21 million on his fake 9/11 hero image.”

As the 10th anniversary approaches, Riches insists that Rudy Giuliani was no hero at Ground Zero. “Before the south tower fell, Giuliani was on Barclay St. with three political cronies,” says Riches. “Police Commissioner Bernie Kerik, whom he promoted from bodyguard and who never passed a promotional exam, now a convicted felon; FDNY Commissioner Thomas Von Essen, former president of the UFA, a firefighter who never passed a promotional exam, appointed commissioner after his union backed Giuliani’s reelection campaign; and Richie Sheirer, head of Office of Emergency Management, who got his commissioner’s job because he was head of the Fire Dispatcher’s Union that backed Giuliani’s campaign. When the south tower fell, Rudy and his Three Stooges ran.” Riches says that Giuliani was half a mile away at Houston St. and Sixth Ave. when the second tower fell.

“All Giuliani did on 9/11 was hold a rah-rah press conference,” Riches says. “That’s it. He later claimed he was at Ground Zero more than the first responders. Bull! Tapes revealed that as we dug he spent about 36 hours at Yankee Stadium for the playoffs and World Series. Now 10 years later he comes to Ground Zero for the cameras.”

This is a small piece of what Deputy Chief Jim Riches, father of Firefighter Jimmy Riches Jr., a true 9/11 hero, would like to tell Bullhorn Bush and Rudy the Fake Hero of 9/11 on the 10th anniversary of 9/11 at Ground Zero.