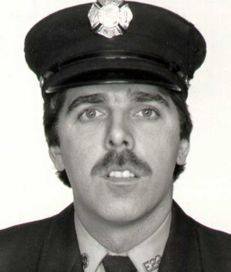 This Firefighter Hero WOD is dedicated to Gregory Stajik, FDNY, Ladder 13, who was killed on September 11, 2001.

Gregory Stajk, 46, of Long Beach was a firefighter assigned to Manhattan's Ladder Company 13 on the Upper West Side. He was on the 37th floor of the north tower. His remains were recovered in November.

Gregory Stajk, a firefighter of 20 years, wasn't supposed to be on duty on 9/11. It was his day off, but Stajk was covering for his friend.

Stajk was selfless and always cared for his friends, his mother, Marge Stajk, said. "I sometimes got mad at him," she said. "He always worked hard and worked for other guys who had families so that they could say home." Stajk was single.

That Tuesday morning, his mother said, she and her husband, George, were watching television in their Florida home when the incredible images flashed on the screen. Neither of them knew what to make of them, and neither thought their son was there.

Stajk played sports his whole life. He was a star pitcher at Kings Park High School in the early 1970's and had tried out for the Cincinnati Reds. He played for the New York City Fire Department baseball team.

And he loved art, earning an undergraduate fine arts degree in 1978 from Long Island University's C.W. Post Campus. When he wasn't working, he was often painting. He sketched celebrities, and he loved drawing scenes of nature. He could make a masterpiece from something as simple as an evening on a river, his mother said. "He would draw anything you could think of, she said.

Marge Stajk said she was relieved when Osama bin Laden was killed in May in a firefight with United States forces in Pakistan.

"We were reliving Sept. 11," she said of herself and her three other children. "It made me feel relieved that they captured him. We don't have to worry about his threats anymore."

Gregory Stajk, 46, attached to Engine 22 in Manhattan, was a firefighter for about 20 years. A Long Beach resident who was raised in Kings Park, Stajk was a star athlete, excelling in baseball at Kings Park High School, according to his sister, Ellen Shelnutt. He tried out for the Cincinnati Reds.

Stajk earned an undergraduate fine arts degree from Long Island University's C.W. Post Campus. His uncle is a retired city firefighter and played a major role in influencing Stajk. A trivia fan, his sister recalled, "he could sit and reel off movies and baseball batting averages for hours."
Source: www.555fitness.org
No Ads (Upgrade)