The Deadlift The Pull-Up 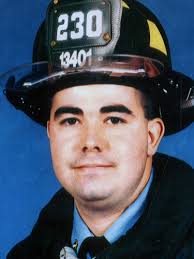 This Firefighter Hero WOD is dedicated to Edward White, FDNY, Engine 230, who was killed on September 11, 2001.

When the eight off-duty Fort Monmouth firefighters arrived at Engine 230’s house in Brooklyn, they had expected to see the tribute outside that neighborhood families had placed out front. But they didn’t anticipate how it would make each feel when visiting and witnessing firsthand what most of us see on the TV or in the newspaper. Near the front door was a table with lit candles, wreaths, bundles of flowers, cards, prayers, an Engine 230 tee shirt, and a banner with the names of the six firefighters lost at the World Trade Center on Sept. 11.

Outside, waiting for their arrival was “chauffeur” John Guarino, commonly called “Johnny G”. Guarino took the Fort Monmouth contingent, along with the home-cooked meals they brought, inside to meet the crew of Engine 230. Sadly, this is not Guarino’s normal crew. His crew never made it out of the towers.

After introductions, Guarino took us all to the roof to tell us about the fateful day and show us from the roof of the firehouse where it all happened. Guarino and his crew had just returned from another call when someone yelled out to turn on the TV. They saw what everyone in the nation was watching – a tower on fire. They ran to the roof to see how bad it was when the call came in to respond. Guarino’s crew mounted Engine 230 and headed for the bridges over to Manhattan. They had to take alternate routes because roads were being shut down quickly.

When they finally arrived, the crew of six (Lt. Brian Ahearn, Fire Fighter (FF) Ed White, FF Gene Whelan, FF Jeff Stark, FF Frank Bonomo, and FF Mike Carlo) dismounted and ran into the towers. Guarino had to stay with the engine. A police officer told Guarino to move his engine up because other crews were arriving. He moved the engine up about two blocks and when he came back his crew was gone. Along with the towers.

The other firefighters on Engine 230 that day were from various firehouses – filling in crew positions. Each had a story to tell and we listened. We learned of events that were not broadcast on TV and the feelings of how everyone felt on Ground Zero when the U.S. flag was hoisted by three now famous firefighters. They told us that things were getting back to normal. For weeks, people had been bringing cakes, cookies and meals. But a few days ago, “We had to chip in and send out for Chinese food and that felt good,” Guarino said.

The locker nametags are still there from the fallen and won’t come down until each man is recovered. Saturday, Oct. 27, Ahearn’s name came down. The firefighters from Fort Monmouth attended his funeral. The good news is that the younger brother of White was recently sworn in as a New York firefighter, upholding a proud tradition. As we left the Bedford-Stuyvesant firehouse that night, we promised to stay in touch, knowing that each day we work at Fort Monmouth, the firefighters of Engine 230 and the other lost firefighters will always be in our prayers and thoughts.

Edward White III, 30, had been with the FDNY for three years. Nicknamed “Teddy,” White was a big sports fan: watching football, playing golf or softball, coaching baseball and basketball in the neighborhood. This big Yankees fan enjoyed collecting baseball cards and other memorabilia. One of five siblings, White’s brother Billy joined the FDNY after 9/11.