The Burpee The Jerk 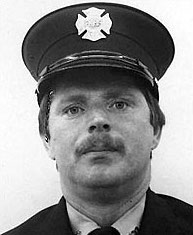 This Firefighter Hero WOD is dedicated to Donald Regan, FDNY, Rescue 3, who was killed on September 11, 2001.

The post office people in Pine Bush, N.Y., knew Donald Regan well. Every Saturday, he mailed parcels to the two of his four children who did not live nearby. He took requests: an old pair of baseball cleats; the spaghetti sauce he and his wife made and canned; money. Sometimes just a letter. He had always kept close tabs on his family. "If there were four sporting events at one time, he would be there for an inning of each game," said his son Shane.

Donald Regan was a firefighter from Rescue Company 3, a 17-year veteran who knew every tool and was considered fearless by his squad mates. His sleep was so deep that he had to fall asleep in the firehouse kitchen so the alarm would wake him, and he was famous for drifting off in the most contorted positions. "He was the consummate blue-collar person," Shane Regan said.

"He worked until he couldn't work any more. He made sure everybody else was taken care of." For his drive to work, his son added, he would buy clunkers with at least 100,000 miles. "My dad was famous for having nasty cars. He called them classics." But with his brood out of the house, he had bought himself a 2001 Chrysler Sebring, and he washed it as if that were his paying job. "He finally broke down and said, `Now I'm going to do something for myself.'"
Source: www.555fitness.org
No Ads (Upgrade)