The Box Jump The Double-Under The Kettlebell Swing The Thruster 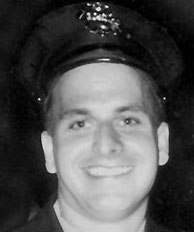 This Firefighter Hero WOD is dedicated to Christopher Santora, FDNY, Engine 54, who was killed on September 11, 2001.

In the last 50 years, few days have had more historical relevance than September 11, 2001. On that clear late-summer Tuesday, when terrorists flew hijacked airliners into New York City’s tallest buildings, nearly 3,000 died just a few miles from Queens. More than 200 of them were residents of the borough.

Among them was a firefighter and lifelong Long Island City resident who had only been in the FDNY for two months. Christopher Santora was just 23 years old when he ran toward the burning World Trade Center to save lives. He was not even on duty at the time. Santora had just returned home after finishing his shift when he got the call about the attacks and raced back to his firehouse, Engine 54 in Manhattan’s Theater District, to help.

He never returned home. Santora died when the towers collapsed. His last known whereabouts were just outside the north tower when the building gave way. After originally being misidentified, Santora’s remains were buried at St. Michael’s Cemetery three months after the attacks.

Born and raised in Long Island City, Santora spent much of his early life on the basketball courts, including one at the intersection of 21st Street and 33rd Road, which now bears his name as “Firefighter Christopher Santora Place.”

During his short life, Santora followed both of his parents in their professional footsteps. Before he went into the FDNY Academy to be a firefighter like his father, Alexander, he followed his mother, Maureen, into the education field, working as a substitute teacher in New York City public schools for several years. He turned down a full-time teaching position to pursue a career as a firefighter — his real dream.

In the years since his death, a scholarship fund has been set up in Santora’s name. “Once we decided to do something good to over-come the bad, we knew exactly what our mission would be: to keep Christopher’s name alive, and to honor his legacy as a teacher and passionate lover of America and her History,” Santora’s parents wrote on the scholarship’s website.

The scholarship, called the Christopher Santora Follow Your Dream Memorial Scholarship, is focused on helping children follow their dreams as Santora did in becoming a firefighter by providing them with the materials needed and up to $50,000 each year.

Some of the dozens of honorees since the scholarship was first awarded in 2005 have been children of firefighters. Also honoring Santora’s education background, PS 222 on 37th Avenue in Jackson Heights was named for him when it opened one year after the attacks.
Source: www.555fitness.org
No Ads (Upgrade)