Score is the time on the clock when the 2,006 meter Row is completed.

According to Coach Flores, who designed the workout, the average time of completion for this workout was about 40 minutes for both a male and female athletes. This workout could take as long as 55+ mins to complete; 60 minutes is a reasonable time cap.

The goal in designing the workout was to  keep it total body throughout, as opposed to splitting upper/lower body movements. By keeping the entire body moving, this workout becomes a true test of aerobic capacity and mental toughness.

The Burpee The Clean The Row (Rowing) The Snatch The Thruster 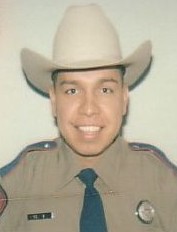 Background: This is dedicated to Trooper Eduardo Chavez who was killed in an automobile accident on May 2, 2006 while responding to back-up another trooper who had requested emergency assistance while making a narcotics arrest near the Hidalgo County / Starr County line. As Trooper Chavez was approaching the scene of the incident one of the tires on his patrol car blew out, causing the vehicle to flip over several times. Despite wearing his seat belt, Trooper Chavez later succumbed to the injuries sustained during the accident.

The workout was designed by Texas State Police Officer Bobby Flores, CF-L1. He did not know Trooper Chavez personally but he knows two of his brothers who he works with.

I wanted to come up with a Hero workout unique to Trooper Eduardo Chavez. Back in the early 2000’s CrossFit was just beginning and weight training was still “traditional” so to speak. Functional fitness as we know it today was in its infancy stages. In trying to coming up with what Trooper Chavez trained, I found it difficult to make the workout challenging enough that would push the body beyond its capabilities with traditional weight training methods. I tested several workout variations before coming up with the below workout that measures determination, drive, aerobic capacity, and most importantly heart!