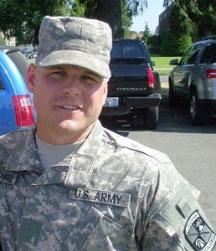 Dedicated to US Army Captain Aaron Roy Blanchard who was killed in a rocket attack in Pul-E-Alam, Afghanistan, on April 23, 2013.

Coaches from Selah CrossFit (Selah, WA, USA) first heard Aaron’s mom speak at a Veteran’s event and were struck by her words. “The biggest fear for a mom who lost their son is that people would forget. We really wanted to honor his family and quell his mother’s fears of people forgetting. We will not forget and are thankful for his service.”

In the workout, the number 32 represents Aaron’s age when he was killed, and the movements are relatively simple and utilize little equipment to make the workout more inclusive for a range of athletic abilities. The workout was first revealed to Aaron’s brother who performed it in South Carolina. Later Selah CrossFit would put on a Memorial Day fundraising event (May 28, 2017) hosting a crowd of athletes for the WOD.

“While Aaron was passionate about service to his country, the center of his universe was his family. He revealed in his role as loving husband to Becky and adoring father of Hunter and Amalia. On leave from the Army or Marines, Aaron sought out time with his brothers, mother and father, and grandparents. He looked forward to family events that brought together scores of cousins, and aunts and uncles.”

“Aaron was preceded in death by his grandfather, Roy D. Blanchard. He is survived by his wife, Rebecca; son Hunter and daughter Amalia; mother Laura; father Don; brothers Michael and Karl; grandfather John; grandmothers Carolyn and Nadine; and an extended family and universe of friends who mourn his passing with broken hearts.”

Selah CrossFit is a small town family-owned box serving Selah, Washington, started by David Gordon in 2012. His wife, Lisa, and daughter, Chloe, both became coaches in 2017. From Lisa: “We desire to serve in our community and the Gym is a perfect spot to start.”